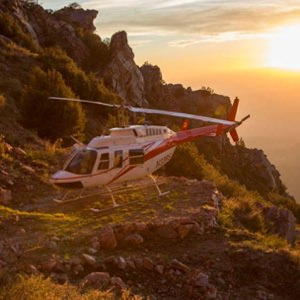 The Arizona Four Peaks Amethyst mine is believed to be the only precious stone mine in the United States that requires a helicopter to transport supplies in and take mined material out. Located in the most rugged parts of the Mazatzal Mountains, 46 miles from Phoenix, the miners live at the mine for 1-2 weeks at a time, and have to hike 9 miles roundtrip to get to work. There is no running water or electricity at the mine and hand tools must be used for the slow tedious extraction of the amethyst.

The mine’s only luxury is a small shed and a generator to light it at night. Solar panels and batteries are used to light and ventilate the mine. Twice a year the amethyst rough is removed from the mine by helicopter and supplies are transported in. The rough Amethyst is taken to Scottsdale where it is cleaned and sorted. The cleaned amethyst is sent to China where it is cut into finished gemstones. Out of 1000 pounds of amethyst rough produced every 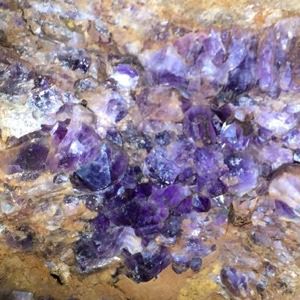 The mine was discovered by Jim McDaniel in the early 1900’s while looking for gold and it has been mined off and on for over 100 years. Four Peaks amethyst was also known to the local Native Americans as a number of amethyst arrow heads have been found in the area. It is also believed that the Spaniards while exploring the southwest learned of the deposit and the Spanish crown contains Amethyst from the mine. 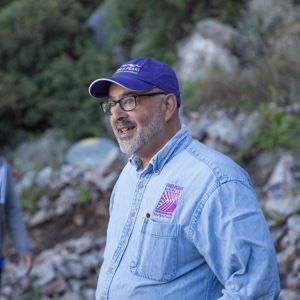 One wonders if they learned of the amethyst by being on the receiving end of those amethyst arrowheads. The amethyst produced at Four Peaks amethyst mine is known as Siberian Red Amethyst as it has a red flash when viewed under natural light. The only other place that produces this color of amethyst is in the Ural Mountains in Russia. The color and the difficulty of mining, make Four Peaks Amethyst a very rare gemstone indeed.

Helicopter tours to the mine are offered several times per year, through our store. Call for details.