While the state is famous all over the world for its turquoise and petrified wood, we’re focusing on a few of our favorite Arizona gemstones and what makes them special. And yes, of course you can find jewelry with each of these stones in the store!

First of course, is our favorite gemstone, amethyst. The stone has a long history and some even say that it’s one of the most popular stones of all time. There are massive deposits of amethyst in both Brazil and South Africa, but some of the rarer amethyst comes from here in Arizona at our own Four Peaks Mine, and in the Ural Mountains of Russia. Both in Arizona and Russia, you’ll find our particular ‘Siberian Red’ colored amethyst.

Amethyst is a member of the Quartz family and can be found in a variety of rocks, from igneous, and metamorphic, to sedimentary rocks.  Some of the world’s largest amethyst deposits are usually found in the fractures and cavities of igneous rocks. In Brazil and Uruguay large amounts of amethyst are found in the cavities of basalt flows. Amethyst is mined all over the world, but Four Peaks Mine remains the only commercial amethyst mine in the United States.

Amethyst is formed over a long period of time and most of the amethyst we’re unearthing today was formed over 100 million years ago from ancient lava fields. When lava bubbled up and cooled, it created pockets of air, water and gas where quartz crystals could form over time (think geodes!). If the minerals iron or manganese were present during the formation of the quartz crystals, amethyst is born, and those clear quartz crystals become purple.

Fun Facts: Amethyst is February’s birthstone. Ancient Greeks believed that wearing amethyst on their person would prevent intoxication while drinking alcohol. We bet you could have found plenty of amethyst at ancient bacchanals! 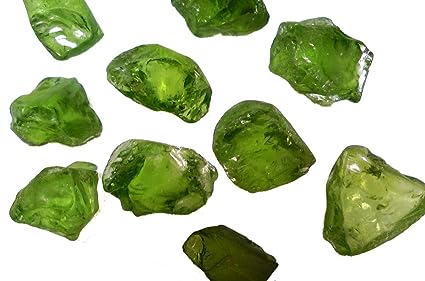 The aptly named, Peridot Mesa, located on the San Carlos Apache Indian Reservation in Gila County, is the most productive area for peridot in the world. It’s estimated that 80% to 95% of the world’s production of peridot comes from the San Carlos Reservation here in Arizona.

Peridot is the best known gem variety of the stone olivine, which is a magnesium-iron rich silicate mineral, and it’s one of the only gemstones that only occurs in one color – green! Peridot is one of only two gems (Diamond is the other) formed not in the Earth’s crust, but in molten rock of the upper mantle and brought to the surface by the forces of earthquakes and volcanoes.

The earliest recorded production of peridot in history was in about 70 A.D. and came from St. Johns Island in the Red Sea, about 5o miles off the coast of Egypt. Most of the earliest known peridot gems came from this location and small amounts of material are still being produced from there today. It’s speculated that one of the ’emeralds’ that Cleopatra wore was actually a peridot stone.

Fun Facts: Peridot is the official birthstone of August and yes, you pronounce it with a silent ‘t’ at the end! Some people believe that wearing or carrying Peridot will help bring luck or prevent people from gossiping about them.

Who doesn’t associate turquoise with Arizona? In 1974, the Arizona Legislature officially designated Turquoise the state gemstone and it ranks first among all the other gemstones mined in the state as the most valuable in production.

It’s almost a guarantee that you’ll find turquoise near a copper deposit and can be found in mines across the American southwest. Turquoise is formed when water enters an iron-rich limonite or sandstone that contains copper, aluminum and other minerals. It takes millions of years and the just right conditions for turquoise to form. When turquoise is more blue, it’s from the presence of copper and when it’s more green, it’s from the presence of aluminum.

Historically, the gemstone has been used in Native American jewelry as far back as 900AD and some of the oldest turquoise beads on record were found in nearby New Mexico at the Chaco Canyon Site. Here in Arizona, turquoise is famous for it’s ‘true blue’ stone color, something that’s more rare to find in other areas of the world.

Fun Facts: Turquoise is the official birthstone of December AND the 11 year wedding anniversary gift.

Who needs miners…when you have ants? While garnets are mined all over the world, these particular garnets are special because of where they’re often found – on the sides of ant hills – across Arizona. While excavating their tunnels and caves, ants come across the garnets and drag them to the surface, where they’re then washed clean by rain and can be easy to spot against the dirt.

Ant hill garnet or Chrome Pyrope Garnet is generally found across Navajo Nation land in Arizona. More often than not, these ant hill garnets are on the smaller side, about 1 carat once polished, and faceted, but are no less gorgeous in their saturated color than their commercially mined counterparts. The joy of ant hill garnet is that they cannot be mined commercially due to the ‘nature’ of the way they’re unearthed by the ants, making them unusual amongst many of the Arizona gemstones.

The mineral pyrope is one of the few minerals that geologists use as an indicator that diamonds can be found in the area on a kimberlite pipe, which is the host rock of most diamond deposits in the Earth. Inadvertently, the ants and their tunneling work becomes a great help to geologists looking to find a deposit of diamonds.

Fun Facts: Garnet is January’s birthstone. The word pyrope, as in pyrope garnet, comes from the combination of two ancient Greek words, pur, which means ‘fire’ and ōps, which means ‘eye.’